Can You be Charged With Armed Robbery When You Never Had a Weapon? 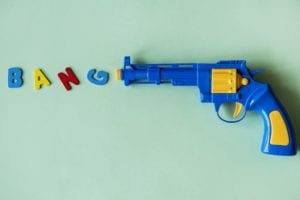 Hiding a toy gun in your pocket during a robbery could net you armed robbery charges!

Ask anyone what ‘armed robbery‘ is, and they’ll tell you it means robbing a store or business (like a bank) with a gun. They may go on to explain that it doesn’t have to be a gun, the robber could use a knife, or some other weapon to threaten the clerk.

Perhaps an explosive of some kind? Or a weapon less commonly used, like a sword? (After all, there was that one guy in Kansas City who robbed a fast food restaurant with a samurai sword!)

However, what they aren’t likely to include in their description of armed robbery, is not being armed with any weapon at all! And why wouldn’t they? Because surely you can’t be accused of armed robbery if you weren’t even armed, right?

Unfortunately no, that’s not right. In Michigan you CAN be charged with armed robbery without ever having touched a weapon! All that’s needed is for the person you’re robbing to reasonably believe that you’re armed!

There are three things the prosecutor must prove for an armed robbery conviction:

In order to get a defendant convicted of armed robbery under our Michigan law, the prosecutor has to prove three things beyond a reasonable doubt to the jury:

If the victim believes you’re armed, then it counts as armed robbery!

This means that if you hid a cardboard roll from the inside of paper towels in your pocket, and pressed it against the fabric of your clothing while robbing a store, you could be charged with armed robbery. Because all it takes is for the clerk behind the counter to look down and see what looks like the barrel of a gun concealed in your pocket, and believe that you’re armed and their life was in danger.

In fact, you don’t even have to have an item that looks like a concealed weapon. If you write a note and pass it to a bank teller saying that you have a gun in your pocket (when in fact you don’t) that would also count as armed robbery. If the teller believed you were armed, that’s all it takes.

Armed robbery carries extremely serious penalties and prison time in Michigan. It’s nearly certain that upon conviction, the defendant will be heading off to prison. If you or a loved one have been accused of this crime, you’re going to need experienced and aggressive lawyers on your side.

At The Kronzek Firm, we explore all evidentiary issues in depth, and know how to build a solid defense for each and every client we take on. Call for a free initial consultation at 866 766 5245 (866 7No Jail) as soon as you’re ready to hire an attorney and begin fighting for your freedom. Our highly skilled criminal trial attorneys are on standby 24 hours a day to help you work through this.