What Happens if I Get Caught Stealing From Cars in Michigan? 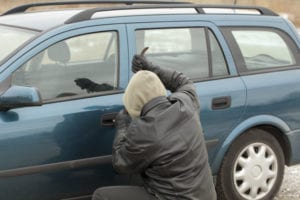 Stealing from cars can lead to serious felony charges in Michigan!

A few days ago we posted an article about stealing cars, and stealing things out of cars – money, sunglasses, purses, and other valuables. This has resulted in a number of phone calls from people wondering about what happens if they get caught stealing things from cars in Michigan. It’s certainly a valid question, and one that many people wonder about. So we figured we’d break it down for you.

What is it called when you steal things out of cars in Michigan?

In Michigan, stealing items from inside a car is covered under the Larceny From a Motor Vehicle statute. Stealing from cars is, in most cases, a felony in Michigan. However, the specific charge would depend on the value of the items stolen from the vehicle.

Does it matter what you steal out of a car?

Yes indeed! As we just mentioned, what you steal will have an effect on the charges you face. For example, if you steal a handful of change out of someone’s car, the value of the stolen property is less than $200.00, and you’ll be charged with a misdemeanor. The penalty is no more than 93 days in jail, a fine of up to $500.00, (or 3 times the value of the property value, whichever is greater), or both.The prosecutor might add on other charges such as malicious destruction of property if you broke a window, popped an ignition or caused other damage to the car.

But if you steal an expensive laptop, a cell phone and a designer pair of sunglasses out of a car, you’re looking at a much more serious charge. At that point, assuming the specific value of the three items combined is more than $1,000.00 and less than $20,000.00, you’re looking at a felony punishable by up to 5 years in prison, a fine up to $10,000.00 (or 3 times the value of the property, whichever is greater) or both. This is serious stuff, folks!

What happens if the car is damaged during the theft?

If you break a window, bend the body, tear the seat covers, or do any damage to a vehicle while you’re stealing things out of it, this will affect your charges. For example, if you only steal a very, inexpensive items out of a car, but break the window in the process, it can increase the charge from a misdemeanor to a felony.

What about if you have prior charges?

If you already have a criminal record when you’re arrested for stealing out of a car, this will also affect the charges you’re likely to face. So if you get caught with less than $200 worth of things taken from a car in Michigan (which is a misdemeanor) but you’ve already got a prior conviction on your record, that misdemeanor just became a felony.

Have you been accused of stealing from cars in Michigan?

If you or a loved one have been accused of stealing items out of a car, you’re going to need the help of an experienced criminal defense attorney. Call The Kronzek Firm night or day to discuss your case with a highly skilled criminal defense attorney. We’re available 24/7, including holidays, at 866 766 5245. Michigan treats car theft very seriously!